Stephen King! We’ve praised his book on writing and pointed out that he’s probably a great guy. We’ve written a story or two he’d probably like. And now it’s time to take a look at what he looks like laughing. 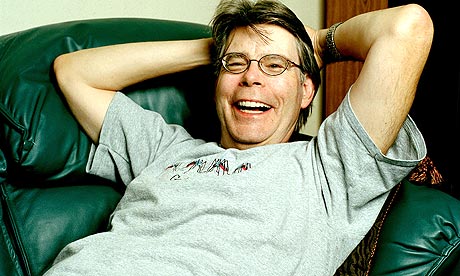 Pretty good! He seems like he’d be such a good neighbor….

…as long as you didn’t build your house over an old forgotten cemetery or something.

First things first: I’ve never finished a Stephen King novel. I’ve started a few, but in the end I’ve never really enjoyed the genre enough to submerge myself for hundreds of pages. I’m not trying to be hoity-toity about it (I’ll leave that to Harold Bloom), I”m just letting you know: I’m more or less a neutral observer when it comes to Stephen King. I’m not a fanboy.

But I can see why he’s sold a zillion books! I find his prose compelling, and when I’ve encountered the odd essay or short story, I’ve gotten pulled in. I like reading his introductions to his books, and I like reading his accounts of things that have happened to him. I’ve read his book On Writing twice. I didn’t take too many writerly lessons from it, but for sheer enthusiasm about sitting down and the typewriter and opening a vein, it’s hard to beat.

You learn along the way, even through this cursory reading, that King has deep blue-collar roots and a real decency toward the people around him. He’s wrestled with some demons. But he also seems like a genuinely nice guy. I wouldn’t mind having him as a neighbor, which is not something I’d have thought before reading the book.

And then there’s this gem from the recent Vanity Fair article on the Rushdie fatwa: END_OF_DOCUMENT_TOKEN_TO_BE_REPLACED