On the eve of a holiday, author and host of the History of Literature podcast Jacke Wilson considers the consolations that  total immersion in literature can provide.

We were in the middle of a dorm war. Every morning between one and three a.m., a resident of some enemy dorm pulled our fire alarm. Presumably someone from our dorm was doing the same at some dorm across campus.

In this war I was a mere civilian. A pacifist, a bystander, a protestor. And every night I was part of the collateral damage.

I was as young and stupid as anyone else, and I vaguely regretted that I was not out there, scheming, pranking, doing college things. Going to parties, meeting new people, heading out on unplanned road trips, horsing around in creative and astonishing ways. I did none of that, and part of me felt I was missing something important.

Frankly I was barely surviving at this place, and I was on the verge of losing my academic scholarship. Pranks were a luxury I could not afford.

And so after ten days of dragging myself out of bed, alarm horns blaring in my ear, I had had enough. Dorm wars? Not for me. I was one of the ones who demanded some action from the administration, which started with an angry meeting with our resident head, Brian.

Brian was a PhD student with a Dutch wife, a beard, and a baby, all of which impressed me. Brian was known as a hands-off resident head who didn’t care about the students experimenting with illegal substances as long as they did it in their rooms and kept the doors closed. (“I”m not a policeman,” was his resident-head mantra.)

We didn’t expect answers from Brian. Brian brought in the director of campus security, who gave us no answers either. Taking the issue seriously, measures were being taken, perpetrators would be brought to justice, penalty would be swift and severe, anyone with any information blah blah blah.

And then, on the eleventh morning, as we groaned and cursed and dragged ourselves out of bed for yet another two a.m. trip to the night streets of Chicago, a thought jumped into my head. Not even a thought. An impulse. But one with a whole wave of thoughts behind it.

The alarm was already going, the fire truck was on its way. Students were already walking out the exits. There was an alarm in our lobby. It was unpulled. And that was my thought:

I should pull it.

What compelled me to think of such a thing? In a strange way I saw it as my reward. Hadn’t I gotten up every morning for ten days straight?

A reward? Let me explain. END_OF_DOCUMENT_TOKEN_TO_BE_REPLACED

We’ve spent Thanksgiving week giving thanks to the Kids, the Elders, and Life’s Sweet Partners. That covers most ground (sorry friends, coworkers, and facebook people I’m pretending to recall better than I actually do – maybe next year!). Or at least it covers most ground personally.

Professionally, I still owe someone special. My enormous debt of gratitude, and my undying thanks, go to a larger community. END_OF_DOCUMENT_TOKEN_TO_BE_REPLACED

Via Maria Popova’s Brainpickings (of course!), we get this amazing overview of Virginia Woolf’s amazing advice on how to read a book.

The whole post is worth reading, but here’s a taste:

To read a novel is a difficult and complex art. You must be capable not only of great fineness of perception, but of great boldness of imagination if you are going to make use of all that the novelist — the great artist — gives you.

Virginia made a cameo here on the Jacke blog once before, when she visited Stonehenge. Glad to have you back, Virginia!

Let’s try a little K.T. Tunstall for our onward and upward. With the legendary Daryl Hall. Can’t we all just go hang out there, at Daryl’s house?

Wonderful Readers! You have proven yourselves to be some of the wisest and most thoughtful people I “know.”

Yesterday I posted a comment from a Wonderful Reader struggling with her family’s objection to her pen name. She had an interesting twist on the issue – and your comments were amazing. For everyone who’s arriving late to the conversation, you can read the original post and the comments here.

I’ll post the resolution soon. But first, I thought I’d post my original response. This was my effort before I had the benefit of your feedback: END_OF_DOCUMENT_TOKEN_TO_BE_REPLACED

A very interesting question came in from a Wonderful Reader:

I have a question. My pen name is my grandmother’s name. It took a long time and a lot of thought to chose that name, but now various members of the family (grandchildren and great-grandchildren of all things — she’s been dead for over 60 years and I never knew her) are offended that I’m publishing, even daring to blog in her name. Should I change to make them all happy? Should I write only “nice” things under that name? I’d love to know how you came to your name and what you think.

(She agreed to let me post this on the main page to ask a wider audience for help, though she’s asked to remain anonymous.)

Readers, what do you think? Anyone face anything similar? How did you resolve it? What happened to your relationships with your family? With your writing? With your sense of self?

And even if it didn’t happen to you, what do you think of this? Dead for over 60 years? On the other hand, who “owns” a name? And who are we to hurt people, even if inadvertently? And what does a writer do if they can only write “nice” things?

A very fascinating set of issues here. Please feel free to leave your thoughts in the comments!

Yesterday I posted about the Magic of Storytelling. Yes, I got a full head of steam going on that one (it happens!), and we definitely achieved liftoff. Fortunately, Wonderful Reader Rain, Rain was there to keep the post anchored in the comments.

To make one of my points, I asked readers to fill in the blanks in this dialogue:

I then filled in the blanks and challenged my readers to try to top me:

Author: Genre? I wasn’t trying to write in a particular genre. I was just trying to tell a story.

Here’s a reminder that life has moments of joy as well as sorrow.

What a great picture. Why do I think that Vonnegut must have said something funny (unexpected and acerbic and witty), and Irving started laughing uncontrollably, and finally Vonnegut joined in because Irving’s laughter was infectious…

Have a great day, everyone! Onward and upward!

Oh, I know, I know. I should be promoting my latest book (price drop! we broke the buck!). I have another Object almost ready to go. I should be working on that. But how can I resist this one? Robie Macauley and Arthur Koestler – themselves two titans of the mid-century literary scene. And… 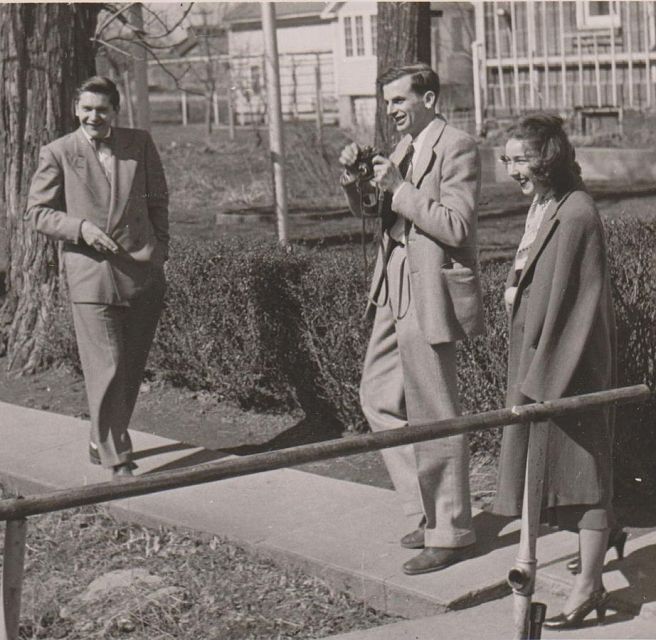 These are harder to find than you might think. So many poses, so many polite smiles, so many serious looks… and then now and then you find a gem like this one… 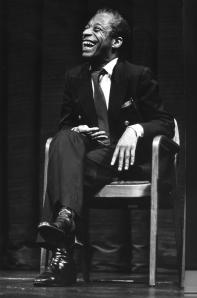 …and everything’s worth it. Like an extra shot of espresso added to my cup of Thursday.

Have a great day, everyone! Onward and upward!