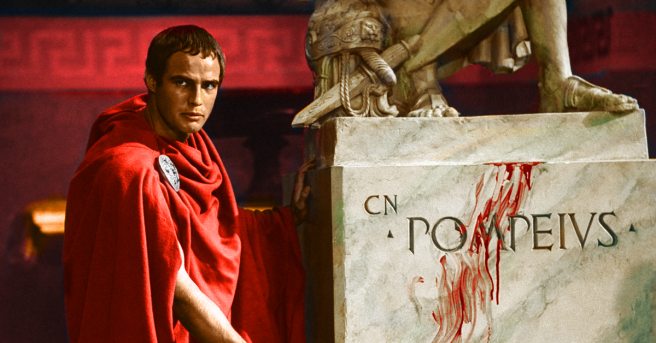 Just after World War II, the poet and critic W.H. Auden said that Shakespeare’s Julius Caesar (ca. 1959) is “of great relevance to our time, though it is gloomier, because it is about a society that is doomed.  We are not doomed, but in such immense danger that the relevance is great. [Rome] was a society not doomed by the evil passions of selfish individuals…but by an intellectual and spiritual failure of nerve that made the society incapable of coping with its situation.”  Why is Julius Caesar so continually important to those living in a liberal democracy? What does it tell us about the relationship of an individual to society and the state? And as the citizens of a republic lose their faith in institutions, how do we reconcile the noble ambition of a Caesar with the high-minded (but bloody) principles of the assassin Brutus?

In this episode, host Jacke Wilson takes a look at Shakespeare’s play, the portrayals of Brutus (James Mason) and Mark Antony (Marlon Brando) in the 1953 film, the fraught morality of assassination, the surprising links between John Wilkes Booth and the play, and an essay from The Journal of Democracy describing the declining faith in liberal democracies in 2016.

One thought on “History of Literature #70 – Shakespeare’s Julius Caesar”