Hail Muse! O ye gods of genius and creativity! Give us a random Beatles song from our randomly chosen random generator… this time we drop an Artemisia stem onto our random Beatles-song selector…and…

Oh boy! Our first real Paul song. Oh, I know, we had “The End,” but this is the first full-blown, get out of the way, a train-of-talent-is-coming-through-and-his-name-is-Paul song.

“Lady Madonna” is one of those earwormy tunes that the Beatles cranked out around the time of the Magical Mystery Tour album, that forgotten little period in between the colossal albums Sgt. Pepper and the White Album. Albums are the thing, right? The pinnacle of artistic achievement from, oh, 1965 to whenever iTunes killed them off? A radio hit is great and all, but fans of the artist measure them in terms of albums.

So we critics bounce from Rubber Soul to Revolver to Sgt. Pepper to Magical Mystery Tour (sort of) to the White Album to Yellow Submarine (sort of sort of) and Let It Be and Abbey Road, analyzing and categorizing and comparing…and we forget that in those days, the Beatles released singles too, and that these were not included on the albums. (The idea the Beatles had was that you didn’t want to make your fans pay twice for the same song.)

So as a collector or even just a fan, you have a whole other album’s worth just of songs—songs like “Day Tripper” and “Penny Lane” and and “I Am the Walrus” and “Hey Jude” and “Paperback Writer” and a dozen others. Songs the whole world knows. Not on an album.

Including this one, which is as good as any of them. So much life and energy! Where does all that spirit come from?

MAYBE FROM THE PIANO…

Those pounding chords! You picture a man playing for a big concert hall with no microphones. Just a man and the strings and the strength of his hands on the keys. And the joy in his heart that hits those bluesy chords, turning the blues into something uplifting. Someone like this:

Hmmm…Paul played the piano, sure…but did he INVENT that opening riff?

Nope. Not exactly. Check this out:

Sound familiar? That’s from 1956, a recording produced by…George Martin! That’s a little quirk of history I wish I knew more about. Did George play the song for Paul and ask him if he thought he could do something with it? Maybe George just happened to play it one day in the studio, and Paul overheard it and immediately sat down at the piano and started banging out some chords. That’s very easy to picture.

Or did the teenage Paul hear the song on the radio, then later use it as the inspiration for “Lady Madonna,” and George Martin casually pointed out “I produced that song, you know,” blowing Paul’s mind just as the Beatles were wowed by the fact that George Martin produced the Goons?

But we’re trying to figure out where the energy in this song came from. Maybe it’s the piano. And…

…MAYBE FROM THE VOICE?

So we get some good boogie-woogie piano going, then Paul comes in with that particular voice he used at times, kind of a cross between his narrator voice and his “sitting at the piano bar I’ll be here all week and dammit I’m going to give you fine people everything I have” voice. How many different voices did he have? Take a listen to “Another Day” and “So Bad” and “Kansas City” and “Maybe I’m Amazed.” We’re so used to hearing Paul, we don’t always recognize that he’s singing in about ten different styles. You may have your favorite style, but all of them are excellent. Together they are amazing. And it’s not a gimmick. (Almost never, anyway.)

They fit the song: that’s the important part.

And of course there are some songs where he sings different styles within a single song, like “Band on the Run” and “You Never Give Me Your Money.”

Actually, that last one is interesting. I’ll cue it up here to the part you should listen to:

A MUSICIAN AGREES WITH ME

“Lennon, to this day, it’s hard to find a singer better than Lennon was, or than McCartney was and still is. I’m in awe of McCartney. He’s about the only one that I’m in awe of. He can do it all. And he’s never let up. He’s got the gift for melody, he’s got the gift for rhythm, he can play any instrument. He can scream and shout as good as anyone, and he can sing a ballad as good as anyone. And his melodies are effortless, that’s what you have to be in awe of…. he’s just so damn effortless. I just wish he’d quit (laughs). Everything that comes out of his mouth is just framed in melody.”

NICE QUOTE, JACKE. WHO WAS THAT FROM?

ONE MORE TAKE ON THE VOICE

Paul called the “Lady Madonna” voice his “Elvis voice.” I guess that works.

Where else do we get it?

I hear shades of it here:

I hear it in some harmonies too, but that’s enough for now. I’ll let you guess at those.

Let’s just cleanse the palate with one non-Elvis song, and recall that the same guy who sings like that can also sing like this:

WHAT INSPIRED THIS THING ANYWAY?

I know what you’re thinking. Half these lyrics are probably some nursery rhyme Paul heard when he was a kid (Monday’s child has learned to tie his bootlace and all that), and the other half probably comes from some woman he saw waiting for a bus in Liverpool. Liverpool was tough, and poor, and it would be just like Paul to be inspired by glimpsing a woman like that.

Paul lost his mother at a young age, and I think he carried with him an admiration for the caretaking, maternal side of women that bordered on longing—well, bordered is probably not the right word, because it probably WAS longing.

Lennon complained that “Let It Be” was too religious. He criticized Paul for invoking the Virgin Mary, pushing an already angelic melody into some kind of hymn or prayer.

Paul’s response? I was writing about me mum. Her name was Mary.

Mary. Mary the nurse. Paul recalled her as “very hardworking, because she wanted the best for us.”

A fan from Brazil asked:”What would you do if you had a time machine?” to which Sir Paul simply replied:”Go back and spend time with my mum.”

Heartbreaking. He was fourteen when she died. Remember that the next time you call Paul saccharine. He needed the sweetness.

Throughout his songwriting career Paul has had a soft spot for women who worked, or who struggled, or who endured. And when he saw these real-life Mother Mary’s performing their tireless acts of motherhood, burdened and full of responsibility, this man in his twenties felt the pull of something urgent and unrecoverable. Something heavy and sad, and something beautiful, all together.

So that’s our best guess for the inspiration of “Lady Madonna”? A woman at a bus stop in Liverpool who had six kids or something? A heavy sigh from a woman struggling to keep bellies full and the electric bill paid?

Not quite. It’s even more universal than that. Here’s the immediate inspiration for the song: 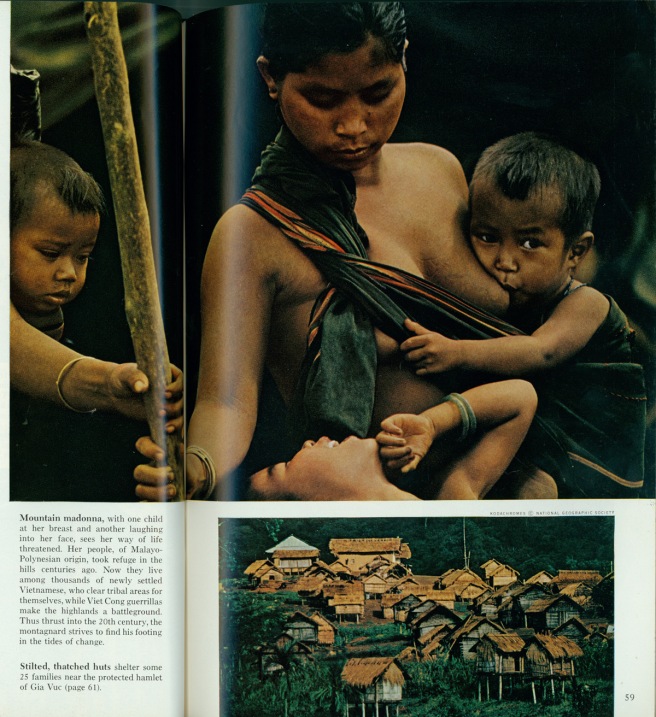 Look carefully at those words in the article. It begins “Mountain madonna…” And the story goes that Paul saw this magazine and said, “Mountain Madonna!? it should be Lady Madonna!” And a song was born. A song born from the most universal element there is.

Do you know the Chinese character for good? It’s the character for woman and the character for child, combined together. We’ve known it since ancient times and across cultures: if you’re looking for something good on this earth, something universally and unassailably good, it’s hard to beat motherhood being done well. And when that relationship is surviving in spite of extreme hardship—well, we can all be inspired by that kind of strength:

Lady Madonna, children at your feet
Wonder how you manage to make ends meet

Oh, I know—there’s plenty of nursery rhyme among the rest, which doesn’t really relate to the woman in the photo. I’m sure he transposed the idea to women he knew, and we were probably back in the world of Liverpool, and the nurses who sold poppies from a tray and all that. Making the rent in those hardscrabble post-WWII years, when the men were killed in the war or came home shellshocked and suffering. It’s a Liverpool song, at heart.

But look at that picture again. Those kids. That playful little one on the ground, laughing, and the mother’s unsmiling but not unloving look downward. That look that says: I see you, and I’m glad you’re laughing, and I’m working hard because I want the best for you.

Lady Madonna, baby at your breast
Wonder how you manage to feed the rest

Paul saw the photo, and the divine tuning fork in him was struck. Another framed melody emerged. (Sorry, Bob!)

How about this for a cover?

Yep. The Queen of Soul, as regal as ever.

And how about THIS?

Fats! This is so good, you would almost think he wrote it, and the Beatles covered it, right? It kind of was…Paul wrote it for someone like Fats, and Fats heard it and wished he had written himself and knew exactly what to do with it, and…don’t you wish you were part of a circle of genius? (Maybe you will be someday!)

Apparently the Fats version was one of Paul’s favorite covers of any of his songs. And his FAVORITE? Hmmm…I’m guessing here, but based on the number of times Paul brings it up in interviews, I think it might be this:

A long story behind that one, which I’ll save until the gods choose to select Sgt. Pepper.

COME ON, JACKE. A WHOLE POST WITHOUT ANYTHING FROM IAN MACDONALD?

Our man MacDonald’s kind of cranky about this one, so I’m not going to quote anything extensive. And since he’s cranky, I’ll be cranky too. MacDonald calls the “See how they run” line a nod back to John’s “I Am the Walrus,” carping that this “amounted to wanton – and perilous – self-mythologizing.”

Oh come on, Ian. Maybe the wanton and perilous mythologizing is something you’ve imagined! “See how they run like pigs from a gun” is a different line altogether! I think Paul may have had a different song in mind. One you may have heard, one that fits better into the nursery-rhyme, mother-and-little-children scheme…

This week be alert to the things that fire your creative spirit. Maybe it’s a photo that arrests your attention, or a smell from the kitchen that transports you back in time, or a stray sound in your house that’s always been there but you’ve never heard before. Something makes you stop and think. Why? Why is it so compelling? What does it mean in your life? And what can you do with it? How can you turn it into something creative? And what else can you draw upon to make it happen?

Creatively there’s the equivalent of a stone in your shoe. Don’t just toss it out. Figure out why it’s there. And then USE it.

Happy Monday, everyone! Be open to opportunities! Keep your spirits high! And look kindly on others!

13 thoughts on “The Tao of the Beatles: “Lady Madonna””