Readers, you have been extremely patient. I know not everyone is on board with the Kindle or other e-device. Curiously, I’ve heard from a lot of people who once had a Kindle and have stopped using it. One wonders what the future will bring. In the meantime, I’m trying to make my books available to as many readers as possible. And with that…I am unveiling… 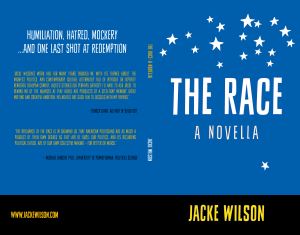 Yes, the print version has been formatted both inside and out. I’m still awaiting the proofs, which should take another week or so, depending on shipping times. And soon after that, if all goes well, you too can own a copy of your very own for the low low price of $4.99.

I’m extremely excited. So why am I concerned? What’s the fly in my bonnet?

Okay. Well, one difference from the above image is the text on the cover spine, which my printer/distributor (CreateSpace) removed because of the book’s thinness. Apparently they cannot guarantee that “slippage” won’t result in the text wrapping over to the front or back cover. Naturally that led me to my bookshelf, in which I found many books as thin as mine (or thinner) that did not have this issue. Text was crammed, maybe, but it had not “slipped” onto the spine. Nor was it so small that it had obviously built in the .0625 inches (in both directions) that CreateSpace recommends.

So… print-on-demand has this limitation, or at least CreateSpace does.

The real problem (as I understand it) is less a printing problem than a distribution problem. If I were ordering ten thousand copies of these to sit in a warehouse somewhere, and to be shipped all over the world to bookstores near you, then it would not be as much of a concern. A couple copies can be printed first. The press can be tweaked and honed before cranking out the batch. Then all the copies can be eyeballed to make sure the cover didn’t turn out glitchy.

But with print-on-demand, you’re only doing one at a time. Each printing brings with it a chance that the machine – remember it’s a machine, not a computer – has loosened a bit, or it’s getting old, or it needs something oiled, or its just temperamental. There’s something not quite as finely calibrated as it should be. If the main images slide around .0625 inches to the left or the right or up or down, the book still looks okay. But that slippage factor on the spine (of a thin book) means half the text could pop over to the front or back cover.

A commenter on one of the million message boards I read about this put it this way: remember, these are machines, not computers.

Right, machines. So why is this a distribution problem and not a printing problem? Because the real problem is I don’t get to see the books first. They ship straight from CreateSpace. Someone in Nepal could buy one, receive one that printed funny, and I would look like a thoughtless author who didn’t care enough to get right. It affects the reading experience, however slight. The dream dies.

So I gritted my teeth and allowed the removal of the text. We’ll see how it goes. CreateSpace was fairly easy to use, but I may need to turn to another publisher, depending on results of the CreateSpace versions. I’ve heard other complaints about the quality of the paper and the fuzziness or grayness of the text, which I won’t really know until I get the proof back.

But the bottom line is that there doesn’t seem much sense to me in going through all this work and winding up with something that looks half-baked.

I’ll keep you posted. In the meantime, onward and upward!